Cheyenne Mountain Zoo
Colorado Springs, Colorado
At the Cheyenne Mountain Zoo’s interactive exhibits, you can get face-to-face with animals. Recently reopened, Down Under Australia lets visitors give a budgie (a small parrot native to Australia) a bite and say hello to wallabies. Or stop by the African Rift Valley to offer lettuce to a large herd of giraffes. Although 17 feet tall, the giraffes stand at eye level because of the exhibit’s unique design. cmzoo.org

San Diego Zoo Safari Park
San Diego, California
Thrilling safari experiences are the main draw at this Southern California zoo. Swing through trees across the 1,800-acre park in Jungle Ropes Safari, or camp overnight while looking out at the plains of the East Africa field exhibit in Roar & Snore Safari. The recently opened Tull Family Tiger Trail—filled with orangutans, rhinos, elephants and indigenous endangered species, such as Sumatran tigers—transports visitors to the forests of Indonesia. sdzsafaripark.org

Lincoln Park Zoo
Chicago, Illinois
Set on Lake Michigan, Lincoln Park Zoo is the only privately managed major zoo in the States. The kids are bound to love the Lionel Train Adventure, a tour of the zoo on a mini locomotive that passes through a birch forest and over a country bridge. Just north of the redbrick train station sits the Regenstein Macaque Forest, where snow monkeys have been spotted lobbing snowballs in colder months. lpzoo.org 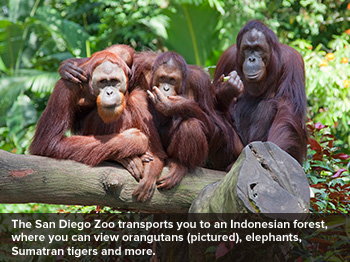 Saint Louis Zoo
St. Louis, Missouri
More than 18,700 animals make their home in the Saint Louis Zoo’s naturalistic habitats—and you can see them all for free. Grownups and kids alike can marvel at the zoo’s 569 species, many of which are rare and endangered, including Chinese alligators and snow leopards. Opening in summer 2015, the McDonnell Polar Bear Point includes a walk-through cave so visitors can get an up-close view. stlzoo.org

Columbus Zoo and Aquarium
Columbus, Ohio
Known for its emeritus director, “Jungle Jack” Hanna, the Columbus Zoo and Aquarium has an animal celebrity in its midst as well. At 58, Colo is both the first gorilla born in human care and the oldest gorilla on record. While you’re there, check out the 43-acre Heart of Africa Safari experience, in which visitors can ride camels through a re-created savanna. columbuszoo.org

Houston Zoo
Houston, Texas
The beautifully landscaped animal habitats at the Houston Zoo provide immersive and enriching experiences for visitors. Don’t miss the African Forest, which takes you on a trek through a re-created village as traditional drum music plays in the distance. A 2-acre expansion now houses two groups of gorillas and a family of red river hogs. houstonzoo.org 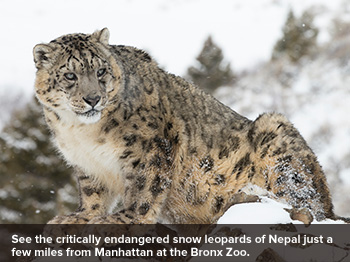 Philadelphia Zoo
Philadelphia, Pennsylvania
Visitors came by steamboat, streetcar and horse-drawn carriage to the opening of America’s first zoo, in 1874. Now they float 400 feet above ground in the Channel 6 ABC ZooBalloon to gaze down at the more than 1,300 animals and take in views of Fairmont Park and Center City. Another highlight is Zoo360, a network of 3 mesh “trails” that allow big cats, apes and treetop primates to move around the zoo’s 42-acre campus. philadelphiazoo.org

Smithsonian National Zoological Park
Washington, D.C.
It’s hard to know where to head first once you arrive at the Smithsonian National Zoological Park. One of 4 zoos in the country to exhibit giant pandas, the national zoo also has the only Meet a Kiwi program, in which visitors can get up close to these endangered flightless birds. Equally tempting are the zoo’s two Andean bear cubs, born in November 2014 and on view for the first time in spring 2015. nationalzoo.si.edu

In Mexico, couples can get away for a romantic escape and families.... Read More