To call the decade-long transformation of Mexico City’s art landscape a renaissance is a bit misleading. From the dawn of Mexican muralism, in the 1920s, to the emergence of neo-expressionism, in the 1960s, the country’s pulsating capital city has long been the nucleus of contemporary art in Latin America. But thanks to a new wave of progressive independent galleries and some seriously stunning modern-art spaces, Mexico City has attracted the attention of the art world’s leading gallerists, collectors and aficionados. Now it’s our turn. So, art renaissance? Maybe. Art evolution? Definitely. 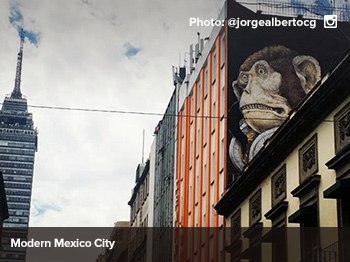 FRIDA AND DIEGO
When charting the progress of any evolution, it’s worth starting at the beginning. And in terms of Mexico City’s contemporary-art scene, that means paying homage to the country’s first couple: Diego Rivera and Frida Kahlo. By far Mexico’s most famous artists, they left a legacy that can be found all over the city. Start at the Antiguo Colegio de San Ildefonso, in the city’s historic center, a former Jesuit college where Rivera and Kahlo met. There you’ll find Rivera’s sprawling first mural, La Creación, the perfect prelude to the Museo Mural Diego Rivera, and the Museo Frida Kahlo (The Blue House), both devoted to the enormously influential careers of the artists whose names they bear. The latter, where Kahlo was born, lived and died, has a lush open garden and is especially spellbinding. The New Class

After immersing yourself in the rich history of the city’s most important cultural icons, it’s time to discover the new generation of artists who will lead Mexico City into the future. There’s no better place to start than Kurimanzutto, the painfully hip gallery in the heart of the industrial-chic neighborhood of San Miguel de Chapultepec. After marveling at the work of major up-and-coming Mexican artists, like Damian Ortega, Gabriel Orozco and Daniel Guzman, follow the skinny jeans and angular haircuts to the nearby LABOR gallery, which impeccably captures the spirit of reinvention coursing through the city’s veins.

MUSEUM MECCA
While Mexico City is home to some of the most renowned museums in the world, a new crop of contemporary-art spaces have emerged that have the cool kids buzzing. Chief among them is the Jumex Museum, a building whose distinct saw-tooth roof has enlivened the city’s skyline while its massive private collection, the largest in Latin America, has enriched its art scene. Another new kid on the block is MUAC (Museo Universitario Arte Contemporáneo), a sleek minimalist shrine to contemporary art both local and beyond.

Slip away from the town’s main stretch to find secluded.... Read More

As our writer discovers, this Australian city has become a haven.... Read More