A bottle of Bordeaux was your grandfather’s Grand European Tour souvenir. Today’s travelers prefer more offbeat bottlings and look beyond wine destinations like Bordeaux or Napa. Fortunately, a global explosion of wine production has made it possible. It’s estimated that wine is being commercially grown in more than 65 countries today. The biggest uptick in production has been with “new latitude” wines, which are grown above and below the 30- to 50-degrees of latitude range, long considered wine’s sweet spot. 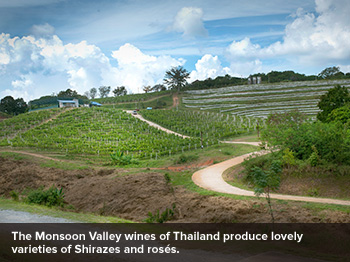 Thailand
One such new latitude is Thailand, home to at least 6 serious wine producers. One standout: The 506-acre Hua Hin Hills Estate. Its hyper-modernist tasting room was designed by Norman Foster alum Sylvia Soh, a Malaysian-born architect. Visitors can tour the vineyard riding the estate’s 3-ton elephant, Honey Bee, and sip Monsoon Valley wines such as peppery velvet Shirazes and mellow rosés (called White Syrah), which are also featured on the menus of Thailand’s Four Seasons and Aman resorts.

Ethiopia
Ethiopia may be considered new latitude but it’s not as new as you’d think. Italian forces that occupied Addis Ababa from 1936 to 1941 planted vines for their own consumption. In 2007, the Ethiopian government and the French Castel Group began to grow grapes commercially (and subsequently dug trenches to keep out the pythons, hippopotamuses and hyenas) in the Rift Valley, 120 miles south of the capital. Today, yearly production is more than 1 million bottles, with a selection that includes Acacia Dry Reds and Rift Valley Syrahs. 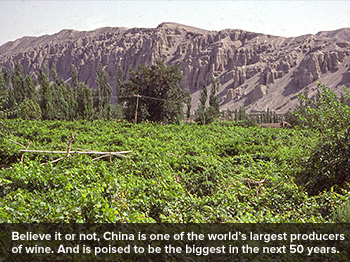 China
China’s wine is neither new nor new latitude, but it’s seen tremendous growth in recent years. It’s one of the world’s top 10 producers, with vineyards being bought up by Beijing billionaires and renowned French estates such as Château Lafite Rothschild.

The Shandong Peninsula—halfway between Shanghai and Beijing—is on the same latitude as Bordeaux. Chardonnays and Rieslings from Huadong Winery, 20 minutes from beer city Qingdao (Tsingtao), are increasingly reputable among oenophiles. Changyu winery’s 100-year-old cellar and Wine Culture Museum are laying the foundation for what will likely become a powerful wine tourism network. Its forthcoming Changyu International Wine City, a $942 million development plan for a massive wine tourism hub and research center, is scheduled to open in 2016. China is poised to become the world’s largest wine producer over the next 50 years. 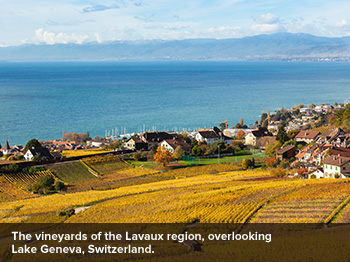 Switzerland
Switzerland has grown grapes since at least A.D. 800, but it exports only 1% of its production. The Lavaux Region is a picturesque UNESCO-inscribed string of hillside wine villages, while its neighbor, the Canton of Valais, is the country’s biggest producer, making unique varietals such as Amigne, Dôle Blanche, and Chasselas (the latter being a great fondue-pairing wine noted for its gunpowdery notes). To sample the stuff that launched Swiss wines into stardom, head to the Fletschhorn Hotel and Restaurant, in the ski town of Saas-Fee. The cellar has 45,000 bottles—many local, all available by the glass.

Croatia
Another European wine region that doesn’t get enough ink is Istria, in Croatia’s northwest peninsula. The area is home to marvelous Malvazias and honeyed amphora wines, aged in buried terracotta pots, varieties that are reputed favorites of some food personalities like Lydia Bastianich and Mario Batali. And in the pretty coastal town of Rovinj, Monte Mullino’s Wine Vault Restaurant houses more than 550 Croatian wines, many available by the glass.

Wine country in Virginia? It's not as outlandish as it sounds.... Read More

Exploring the food of San Sebastián, Spain, one bite at.... Read More

In the past, visitors came to Ireland and Northern Ireland for.... Read More