While it often gets a bad rap, Las Vegas has become one of the best adult-vacation spots in America. Where else can you find world-class shopping, top-notch spas and restaurants helmed by Michelin-starred chefs, all a half-hour away from great hiking, biking and rock climbing in a stunning high-desert landscape? 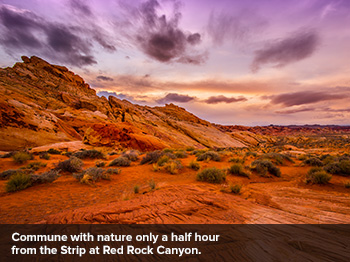 Indeed, today’s Vegas can be anything you want it to be: It’s a veritable playground for grown-ups, from gamblers to gourmets. The challenge is to fit in all you want to do in the (usually) short time you’ve got to do it. That’s why couples often adopt a “divide and conquer” strategy, in which the women and men go their separate ways during the day, then reconvene in the evening for various gastronomic (and other) adventures. Here, the girl’s-versus-guy’s guide to a city that really never sleeps.

Gals
Channel Your Inner Showgirl
Start with a snakeskin pedicure at Vdara Spa: It’s a gel pedicure in which real (naturally shed) snakeskin is applied to your toes, on top of your choice of color. Then strap on your highest heels and head to X Burlesque University at the Flamingo. During a 75-minute class, you’ll learn the all-important techniques of applying false eyelashes and stage lipstick and working a feather boa, then get schooled in a burlesque routine. After picking up some new skills, have a special cocktail at the Chandelier Bar, set on three floors of the Cosmopolitan Hotel and swagged in crystals. Try the Campfire Delight; it’s like a s’more in a glass, made up of a rum-cream liqueur, two types of chocolate, a graham-cracker-coated rim and toasted marshmallows. Next head to Minus5, a bar carved entirely from ice—the structure, the furniture, even the glasses in which your drinks are served.

Guys
Be a Kid Again
Around the age of five, boys often develop an obsessive interest in toy cars and heavy construction equipment. In Vegas, an adult male can drive a real Lamborghini and operate a real bulldozer.

At Exotics Racing, you’ll start by getting some driver’s ed on the exotic paddle-shift cars meant for racing. The hardest part will be choosing your ride from a stable that includes a Lamborghini, a Ferrari, a Mercedes SLS AMG and an Audi R8.

For those who prefer their machines a little larger, Dig This offers a chance to operate an excavator or bulldozer, just like the ones you see on construction sites, on the company’s “heavy-equipment playground.” Fuel these adrenaline-laced activities at the Burger Bar in Mandalay Place, where you can customize every part of your meaty creation, from protein to bun to garnishes. (The truffled potato chips are a must.) Or, for lunch on the fly, grab a slice at the Pizzeria at the Cosmopolitan.

Gals
Commune with Nature
Even if you think you’ve had your fill of red rocks in Colorado or Sedona, you’ll want to see Red Rock Canyon, a national conservation area about a half-hour from the Strip. Pink Jeep offers a four-hour tour of the 13-mile loop, where you’ll see fossilized sand dunes and Native American pictographs. If you prefer exercise with your nature, take a weekend yoga class in the underwater-viewing area at Siegfried & Roy’s Secret Garden & Dolphin Habitat. Watch the animals frolic while you’re led through an hour’s worth of poses, and enjoy complimentary use of the spa facilities afterward.

Guys
Eat (and Drink) with Gusto
Ever hear of yellowtail collar (aka hamachi kama)? This Japanese delicacy is a favorite of Anthony Bourdain; at Bar Masa it’s showcased at its fatty best, especially when accompanied by a beer chosen by expert sommelier T.J. Buraszeski, Jr. Speaking of beer, check out Sage, where chef Shawn McClain’s tasting menu—four generous portions including dessert—is available with beer pairings. Beer is also the star at the Venetian’s Public House, a gastropub with more than 200 kinds of suds on tap. Nevada’s first certified beer cicerone will help you choose (but he won’t turn down the music, played at levels that kill the otherwise awesome ambience). The menu here is meat heavy; the marrow dish is a must.

Gals
Bliss Out
The not-very-Zen Strip is home to some of the best spas in the country, and most offer day passes for around $40. At Aria, try the heated Japanese gaban’yoku stone beds, said to increase circulation. It’s worth paying for entry to the Spa at Encore, at the Wynn, if only to see its over-the-top design. The spa also has several “experience” showers: One mimics a waterfall; another shoots water all over your body.

The prize for best Jacuzzi goes to the The Spa at Mandarin Oriental, whose soothing Vitality Pool has unrivaled views of the Strip. The star at Sahra Spa at the Cosmopolitan is the hammam, a $3 million bathhouse that can be experienced only by booking a treatment but is worth every penny.

Gals
Be One of the Guys
Women who play poker are like women who drink scotch—instantly intriguing. Find out how to be one of them at Mandalay Bay, where poker lessons are free several days a week. Not only will you learn several versions of the game; you’ll also be schooled in terminology and table etiquette. Afterward head over to the Old Homestead, a classic New York steak house with a Vegas outpost in Caesar’s. It serves Pat LaFrieda dry-aged meats and truffled gnocchi to die for; both can be paired with wine flights that may include selections from Opus and Justin.

Guys
Revisit Old Vegas
Start by touring the Neon Museum, whose collection of oldie-but-goodie signs will make you nostalgic for the Rat Pack days. Currently housed in an outdoor lot, it’s scheduled to move to a permanent home later this year. Next stop: the new Mob Museum, located in (wink, wink) the old courthouse. It offers a comprehensive journey through the history of organized crime, from the early beginnings to today. The extensive display of mobster memorabilia includes John Gotti’s white suit; interactive exhibits allow visitors to listen to wiretaps.

View two feats of engineering at once when you visit the Hoover Dam with Pink Jeep tours. The dam, revolutionary when it debuted, is now spanned by the Mike O’Callaghan–Pat Tillman Memorial Bridge, a beautiful 1,900-foot-long concrete arch that opened to the public two years ago.

Guys
Get Off the Strip
Vegas’s hottest new bars aren’t on the Strip; they’re downtown. At Insert Coins, play video games in a private booth with bottle service, or partake of a little Pac Man or Tron or one of the many other games in this cavernous space. Across the street at the Griffin, you can have a drink beside a fire pit surrounded by the Vegas version of hipsters.

It’s all about a proper drink at the Downtown Cocktail Room, whose bartenders don’t call themselves mixologists. And just a short drive away is Frankie’s Tiki Room, where your favorite rum drink (when in doubt, try the Thurston Howell) can be served in an artist-designed ceramic tiki glass, which you can take home. Who says that what happens in Vegas has to stay there? 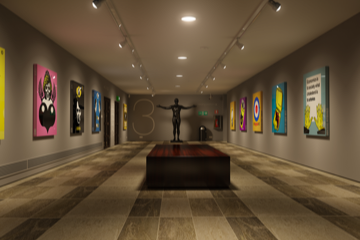 You may have come just to eat, drink and gamble. But look out!...Read More

Rome wasn't built in a day, but to Las Vegas regulars it must...Read More

The Variety of Vegas

From taking in the art scene to digging deep into the city’s...Read More